To share your memory on the wall of Rita Mack, sign in using one of the following options:

Provide comfort for the family of Rita Mack with a meaningful gesture of sympathy.

Rita married Cornelius “Connie” Mack on June 29, 1941 at St. Charles Borromeo Catholic Church in St. Charles, Missouri. They were blessed with 66 years together before he preceded her in death on March 28, 2007. Rita was a dedicated and loving wife, mother and grandmother. Early in her married life, she worked in the aircraft industry in Detroit in support of the WWII war effort. Later, she worked for a number of years at Sherman’s clothing store on the Carlinville Square. She was a faithful member of Ss. Mary and Joseph Catholic Church in Carlinville for more than 60 years.

A funeral mass will be held at 11am, Saturday, December 15, 2018 at Ss. Mary and Joseph Catholic Church with a 1 hour visitation at the church beginning at 10am. Burial will follow at New Calvary Cemetery.

We encourage you to share your most beloved memories of Rita here, so that the family and other loved ones can always see it. You can upload cherished photographs, or share your favorite stories, and can even comment on those shared by others.

Posted Dec 28, 2018 at 11:05pm
I only met her once when she was visiting dear Delores Mack. I’ve tried to phone Delores however I think she is not well herself. My deepest sympathies to her family. I have many memories of Johnny Mack talking about his brother Connie. Katherine Conrad Walters( My grandmother was Johnny’s significant other)
Comment Share
Share via:
K

Posted Dec 17, 2018 at 09:45am
I want to offer my deepest sympathy to the friends and family. May you find comfort and peace in Gods promise Revelation 21:3-4 "pain and death will be no more". Again my condolences.
Comment Share
Share via:
DB 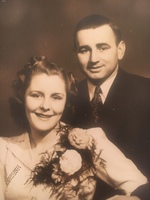